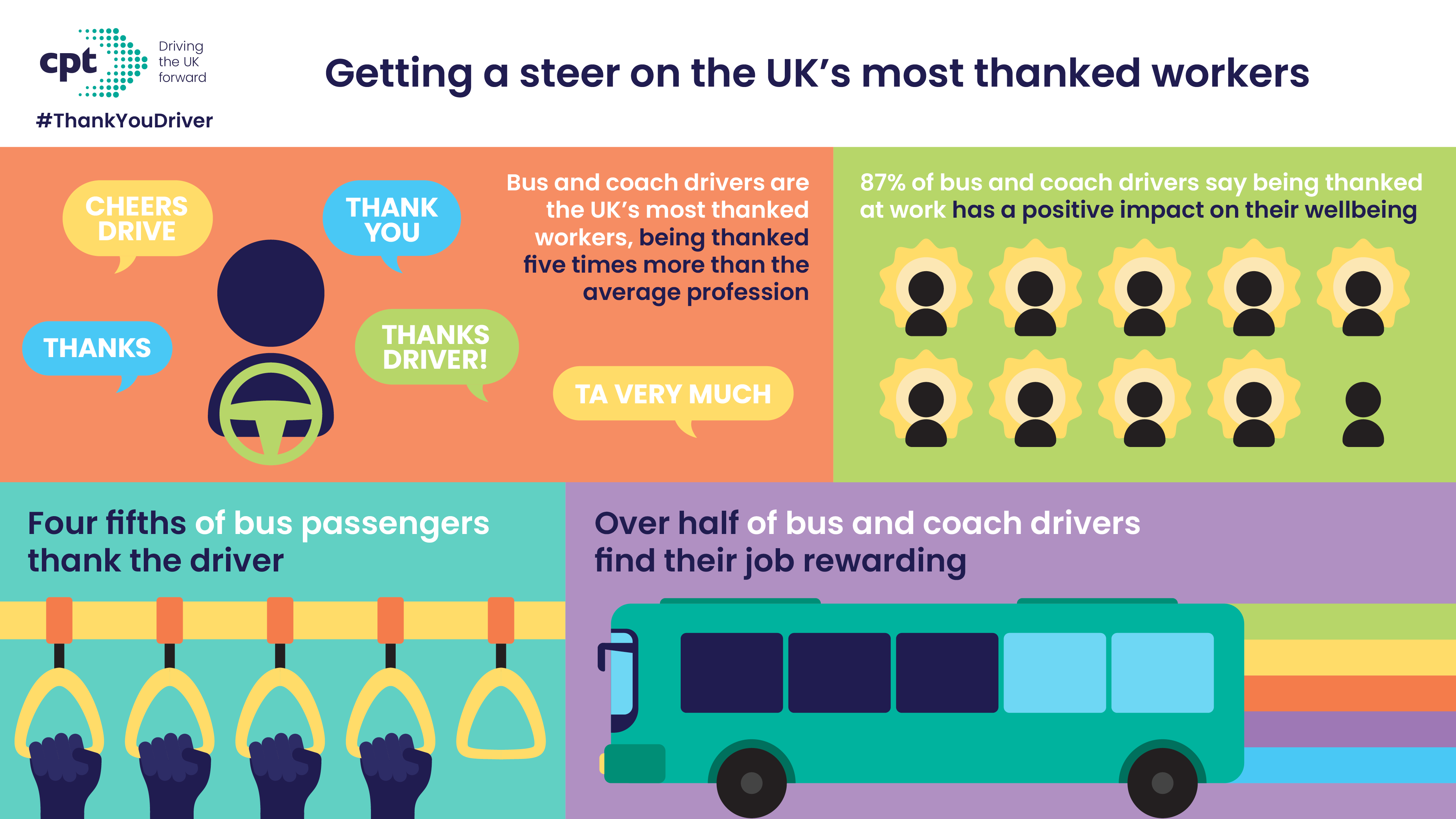 Bus and coach drivers revealed as the UK's most thanked workers

The profession is thanked 37 times a day, five times more than the UK’s average worker

Bus and coach drivers have been revealed as the UK’s most thanked workers, receiving a thank you on average 37 times a day – five times greater than the national average.

As many as four in 10 bus and coach drivers get thanked over 50 times a day; dwarfing other sectors like healthcare and retail where just 1% and 3% of workers are thanked 50 times a day respectively.

The research also found that four-fifths of bus travelers thank the driver, with nine in ten drivers saying a thank you positively affects their wellbeing. In fact, the data highlighted that over half of UK workers wished they were thanked more for their job. A quarter reported getting no thanks at all despite 77% saying it is beneficial to their wellbeing.

Feeling unappreciated was revealed as one of the biggest gripes for UK workers (22%), second only to salary (26%) with healthcare, retail and logistics workers the most likely to feel unappreciated in their jobs.

Being appreciated was listed as one of the best things about being a bus or coach driver with over half saying they felt their work was rewarding – according to the research the role offers seven of the top ten things that UK workers value most.

These include meeting lots of different people; working without supervision; working solo; serving the community; being thanked and appreciated; good work life balance; and training opportunities.

Graham Vidler Chief Executive of the Confederation of Passenger Transport said: “Our research has shown that being thanked and appreciated is crucial to the wellbeing of the UK’s workers. It’s really pleasing that bus and coach drivers are reporting such a high level of thanks. Many aspects of bus and coach driving are sought after by other UK workers, whether that be not being confined to an office, meeting new people or being your own boss.”

The survey went on to find that one in 10 had fulfilled a childhood dream by becoming a bus driver whilst almost a quarter entered the profession after being made redundant or losing a job. While one in seven said it was to have greater freedom.

It also emerged that nine in 10 adults have the skills to become a bus or coach driver – such as reliability; functioning without supervision; problem solving; remaining calm under pressure; and strong interpersonal skills.

Graham Vidler continued: “Drivers are at the heart of their local communities, helping people access education, healthcare, leisure, and jobs. Many enter the industry and stay for decades, testament to their dedication to a rewarding and highly regarded career.

“It is never too late for those feeling unappreciated in their current profession to make the switch to become one of the UK’s most thanked workers. Especially given most bus and coach operators joined after working other jobs and the majority of the UK population has a driving license so could potentially start training right away.”

Dr. Ashley Weinberg, Senior Lecturer in Psychology at the University of Salford, commented on the research, saying: “Hopefully we all know that it's important to share gratitude as a genuine form of exchange with others in our social worlds. For all of us in paid or unpaid work, someone saying 'thank you' helps us to feel valued and naturally this is hugely important for our mental well-being.

“It encourages us to feel positive about ourselves, as well us to recognise meaning in what we're doing at work. Hopefully this inspires us to carry on engaging in efforts to make a positive difference to others.”

To view and apply for available positions in your area as a bus or coach driver visit the official website: thankyoudriver.org or if you are in Wales or the South-West cheersdrive.org

The Confederation of Passenger Transport is the national trade body for bus and coach operators across the UK, with around 900 members 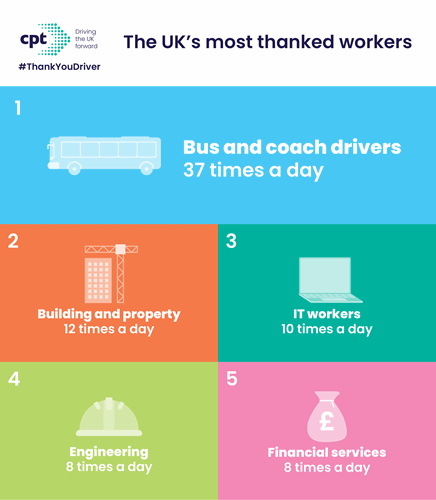