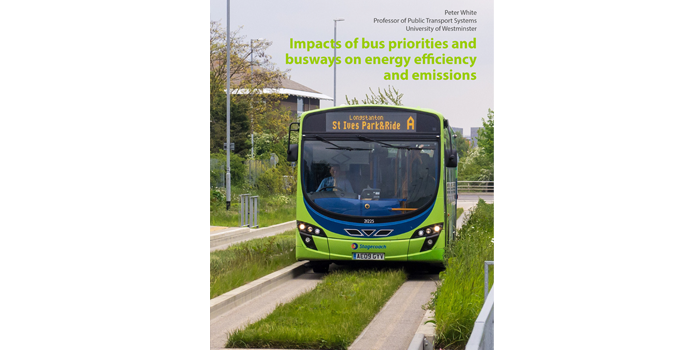 Impact of bus priorities and busways on energy efficiency and emissions

The energy efficiency of buses on scheduled local services can be analysed in two respects:

Vehicle energy consumption in turn is affected by:

The mass of the vehicle thus becomes an important factor, and in this respect buses typically produce a lower figure than for rail vehicles, approximately 125 kg per passenger space[2], compared with about 250 kg for rail. As stop spacing becomes closer, the energy used in repeated acceleration from stops tends to become predominant rather than that due to rolling resistance. The component due to engine idling also increases. Estimates about thirty years ago by a German manufacturer suggested that for a standard-size single-decker, energy use rose from about 30 litres per 100 km (3.3 kpl) at one stop per kilometre run, to 60 litres per 100 km (1.7 kpl) with four stops per kilometre[3]. Such stops will be of all types, i.e. fixed stops at which passengers board or alight, pedestrian crossings, junctions, and the ‘stop-start’ pattern associated with congested traffic flows.

[1] In some cases, use is still made of miles per gallon (mpg). This indicator may be converted to kpl by applying a factor of 0.3611.

Every forward facing seat on buses now able to be used

In response to an increased demand to travel following the easing government restrictions, from Monday 17 May it will be possible to use every forward facing seats on buses in England.

CPT has reacted to the announcement made during a CPT Live event that coach parking in Blackpool will be free until January 2022, up to a maximum of 72 hours.

Responding to a Government review of Destination Management Organisations CPT has highlighted that coach friendly policies at tourist destinations and attractions are essential for kickstarting tourism in local areas across the UK.